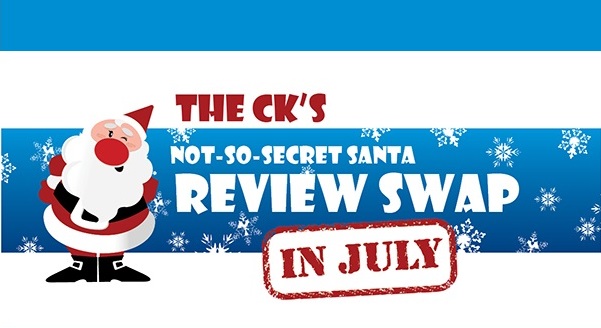 This is a bit of a special post.  As the banner above (oh so subtly) indicates, this is part of movie-review blog Cinematic Katzenjammer's Not-So-Secret Review Swap.  Whereby a number of bloggers pick a title they want others to review, and are themselves assigned one.  So, without further ado, this is Dogtooth. 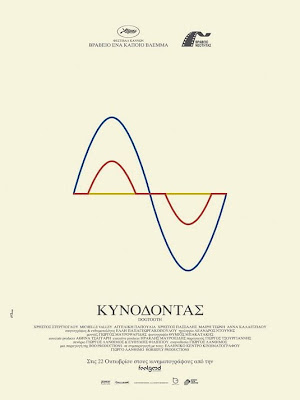 Dogtooth focuses on a family living in a gated compound.  The parents have convinced their young adult children that the world outside the compound is extremely dangerous, and can only be entered safely if you are in a car.  As such, only the father ever leaves the compound, keeping his son and two daughters completely ignorant of the outside world, with the exception of paying Christina, a young woman who works as a security guard at the same factory as the father, to have sex with his son. She brings little bits of the outside world in with her, and this spurs on the plot.
The entire story is permeated by a sense of surrealism.  The house and garden seem almost overexposed, making it seem bright and bleak at the same time, almost sterile. Hermetic, even.

The cinematography is excellent at creating this feeling, making you feel like a voyeur, an intruder from the world outside the gate.  You are put in a world where the rules are different, where words have different meanings and the only reality is what you can see with your own eyes.  Perhaps what's so deeply unsettling about this story is that it makes us realize how much of what we think we know about the world, how much we are absolutely, undoubtedly, completely and utterly certain of, we haven't proven for ourselves, is, in fact, just something we've been told, just as the children in Dogtooth have no reason not to believe that fish just appear in their swimming pool. How many things we take for granted are, in fact, given?  With the exception of Christina, none of the characters in the movie have names; they are just Father, Mother, Eldest Daughter, Son, and Youngest Daughter.  They live in a world that is like a claustrophobic version of Wonderland.  If the emotion is predominately one of surrealism, the story and characters inhabit a world of hysterical realism, one that behaves by its own rigid logic, but a logic that is largely inaccessible to you or me.  But the characters accept that airplanes are only several inches long as readily as you or I would accept that the moon is huge.

Perhaps the greatest force for the discomfiting unreality is how the characters straddle the line between children, adults, and automata.   This mix of childlike credulity and dependence, an occasionally adult willfulness (not to mention the sex, which I'll talk about later), and an almost military obedience to the father, is unsettling.  Add to that an almost guileless sincerity to their emotions, and the frequent lack thereof. The acting requires treading a very thin line, being strange and dissociated enough to seem alien, while being vulnerable enough to relate to, and the actors walk this tightrope with great skill.

If you watched the trailer, you may have noticed a quick shot of the Younger Sister licking the Eldest Sister's shoulder.  Incest plays a large role in the story, thematically and literally and occurs with the same ingenuousness and apathy as the rest of the performance.  This goes back to the question of knowledge. The characters' entire understanding of the world comes from what their parents tell them and their own (extremely regulated) experience.  Besides being much more explicit than you'd find in an American film (Dogtooth is unrated in the US, but I'd expect it would get an NC-17), the sex scenes in Dogtooth carry forward the disturbing nature of the story to its climax (pun regretfully intended):  It not only breaks the most deeply ingrained taboo we have, but the act itself is done with an almost stoic reserve by both involved.  It's not portrayed as a result of passion, or lust, or love, or pleasure, etc. etc.  Like most everything in this movie, it takes something we understand (or think we understand) on a very fundamental level, and presents it to us in a strange way, leading to a feeling of alienation that is increased by the voyeuristic cinematography.
In 2011, Dogtooth was nominated for the best foreign language film Oscar (losing to Denmark's In a Better World).  It won prizes at many film festivals, including Cannes.  This is significant, because Greek cinema has had little international appeal for decades.  While many people (i.e. me and many people I know) find the Academy Awards to be (just a smidge) self-indulgent, the importance of the nomination to the Greek film industry is significant.  In fact, no Greek film had been nominated for an Academy Award since 1977's Iphigenia and has never won the award.
Succinctly, Dogtooth is an impressive film.  The reason I don't say it's "a good movie" is because I don't feel that the terms "good" or "bad" can accurately convey how I feel about a movie that is so different from what we usually see.  The acting was excellent, the story was compelling.  The cinematography and set design were remarkably effective at creating a surreal and unsettling tone.  In those regards, this is a good film.  (I would have liked to see a little more about how this way of life affected the father and mother, but that's a minor point.)   But those are really means to an end.  The end, in this case, is to challenge your understanding of the world, both emotionally and intellectually.  It's an understandably uncomfortable process.  It succeeds in that goal, but whether or not that is good or bad somehow seems to be an invalid question.   I'd recommend the film, with the caveat that some people may find it upsetting.  Not just because of the subject matter of the explicit sex scenes (if you can't handle that, there's no way you'd benefit from watching this film), but because it does so in a way that causes a very uncomfortable emotional contradiction, creates a sense of alienation from and intimate connection to the characters.  It pulls you halfway into a world where the morality is largely incompatible with our own.  It's an experience that can either be beneficial if honestly acknowledged and considered, or just incredibly unpleasant.
(Because I fell obligated to include a lit reference, you should really read David Foster Wallace's essay David Lynch Keeps His Head from the collection A Supposedly Fun Thing I'll Never Do Again, which deals with much of what I discussed in the last paragraph, only w/r/t David Lynch films.)