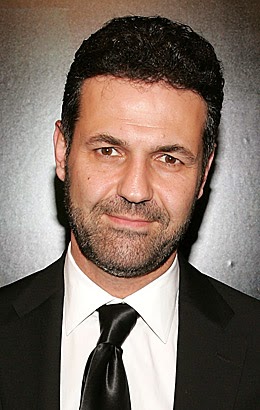 Khaled Hosseini (1965-    ) was born in Kabul, Afghanistan.  His father was a diplomat and his mother was a teacher.  His family lived in Tehran, Iran, from 1970 to 1973, when his father was stationed at the Afghan embassy there.  In 1976, his family left for a diplomatic position in Paris.  They were in Paris during the Soviet invasion of Afghanistan, and applied for political asylum in the United States, which was granted in 1980.  The family settled in San Jose, California.   Hosseini earned a Bachelor's in Biology from Santa Clara University in 1988, and got his medical degree from UC San Diego in 1993.  He worked as an internist from 1996 to 2004.  His first novel, The Kite Runner (2003), was a critical and commercial success, and received a film adaptation in 2007, the same year A Thousand Splendid Suns was released.  He published his third novel, And the Mountains Echoed, in 2013.  He lives in Northern California with his wife and two children.

A Thousand Splendid Suns takes its title from a description of Kabul in a poem by the 17th century Iranian poet Saib Tabrizi.  The novel is split into four sections, the first focused on Mariam.  Mariam's father was a wealthy business owner in Herat, and her mother was a maid in her father's household.  Her father and his wives came to an arrangement whereby Mariam and her mother lived in a small isolated home outside of the city, and the father visits once a week.  Mariam's mother is bitter and stubbornly superstitious, considering her epilepsy to be possession by a djinn, even though, as Mariam's points out, there are pills to treat her condition.  Mariam leaves her mother for her father's family, only to discover how unwanted she is and is soon married off to an older man from Kabul.  This man, Rasheed, is violent, overbearing, and religiously conservative.
The second section follows Mariam's neighbor's daughter, Laila.  Her father was a teacher and both parents were forward thinking progressives.  Her best friend, who she falls in love with, is a boy named Tariq, who lost his leg to a landmine.  The wars in the area tear her family apart, first with the death of her older brothers who had been fighting with the mujaheddin, which leads to her mother's depression and nervous breakdown.  The victory of the mujaheddin is only a brief respite from violence, as the different factions turn on each other.  Tariq and his family flee Afghanistan, and Laila's family is about to do the same when a rocket hits their home, killing Laila's parents.  Laila is rescued from the wreckage by Mariam and Rasheed, who decides to make Laila his second wife.
The rest of the novel deals with the relationship between Laila and Mariam and the continuing strife in Kabul.

I'd like to point out that the thirteen books preceding this on the list consisted exclusively of Grisham, Brown, Albom, Waller, and LaHaye/Jenkins.  It's nice to read a bestseller that isn't pandering/pseudo-intellectual/boring/or mind-bogglingly stupid (Albom/Waller, Brown, Grisham, and LaHaye/Jenkins, respectively).  A Thousand Splendid Suns can be didactic at times, especially early on with language and culture, the characters are rounded, the prose is clean, the history isn't made up, and Hosseini manages to be make moral statements without being heavy-handed.  Well, generally.  The first section is pretty in-your-face with its message, but it still manages to avoid being patronizing.  The second section is less heavy-handed, but it often lapses into didacticism.  This is often understandable though, as the history of modern Afghanistan is complex and Hosseini is writing to a mainstream American audience, an audience which he hopes to teach about his home country.

Hosseini uses Mariam and Laila to contrast the radically different social and ideological backgrounds in Afghanistan, without resorting to caricature.  As opposed to someone like Michener or Uris, who would spend 367 pages covering a century of Afghan history via a family line acting as representative of an entire ethno-religious demographic, Hosseini views about fifty years of Afghan history through the lens of two individuals and their experiences, with much greater effect.

And Afghan history, for obvious reasons, was much on the minds of the American reading public in 2007.  Middle Eastern politics is a massive can of worms and seemingly impenetrable to the layman.  Tie this to the popularity and credibility Hosseini gained with The Kite Runner, and it's easy to see why A Thousand Splendid Suns was a smash hit.

While the beginning felt a bit heavy-handed, once I got past it I enjoyed the book and would recommend it.

1. Harry Potter and the Deathly Hallows by J.K. Rowling*
2. A Thousand Splendid Suns by Khaled Hosseini
3. Playing for Pizza by John Grisham
4. The Choice by Nicholas Sparks
5. Lean Mean Thirteen by Janet Evanovich
6. Plum Lovin' by Janet Evanovich
7. The Book of the Dead by Patricia Cornwell
8. The Quickie by James Patterson and Michael Ledwidge
9. The 6th Target by James Patterson and Maxine Paetro
10. The Darkest Evening of the Year by Dean Koontz

The Absolutely True Diary of a Part-Time Indian by Sherman Alexie
The Yiddish Policemen's Union by Michael Chabon
The Brief Wondrous Life of Oscar Wao by Junot Díaz
Tree of Smoke by Denis Johnson
August: Osage County by Tracy Letts


*Although Harry Potter and the Deathly Hallows sold more copies, it was not included on the original Publisher's Weekly list, which is what my reading is based on.