I first saw Eraserhead on Halloween night in an abandoned office building in Berlin.  That's not a joke.  It was the Halloween party for the Berlin Film Society, a film enthusiast club that specializes in pop-up cinema, screening interesting films in unexpected locations.  This was an empty office building in what was once East Berlin, one of those blocky grey concrete-and-glass structure, with a small table for the ticket takers in the bare lobby.  I had found out about the event while searching for something to do Halloween night (Halloween isn't as widely celebrated in Europe as it is in the U.S.).

Nearly the entire second floor of the building was used for the event, with a full bar, a large selection of free donuts, and eerie lighting. 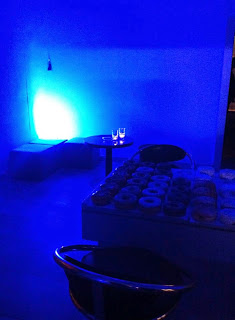 I was there on the early side, so I chatted with the bartenders a bit, one German and the other from SoCal.  (According to the German one, the absence of 40 oz. beers in the Germany is an untapped market.)  I should mention that not only was the screening and afterparty costume optional, the advertisements promised a free shot of vodka to all who came dressed as a David Lynch character.

David Lynch's Eraserhead (1977), whether you love it or hate it, will stick in your memory forever.  The protagonist is especially memorable.  But how and when you see a movie has large impact on how you think of it.  As mentioned earlier, there was an afterparty, which was still going strong when I left sometime around four in the morning.  But more than watching Eraserhead in an abandoned German office building, or watching next to an exchange student dressed as Pikachu, or attending the subsequent afterparty dj'ed by a guy in a paper David Lynch mask:

No, more than any of that, it was one guy, one guy who came dressed as Henry, the film's protagonist, only taller, as if the movie were played with the wrong aspect ratio. Throughout the entire party, from the time it started to when I left, he was dancing, which would have been weird enough except for the fact that he seemed to have gotten all his moves from Saturday Night Fever.


This was the only image I was able to find online, and it's not a particularly good one. (I guess at some point he lost the suit jacket.)  While I certainly approve of showing people Eraserhead then offering to sell them alcohol as a business plan, the experience was certainly strange.  And now, whenever I think about the film, I remember blue-lit donuts, German pop music, overpriced whiskey, and this weird guy.